The Show Goes On at Performing Arts Camp 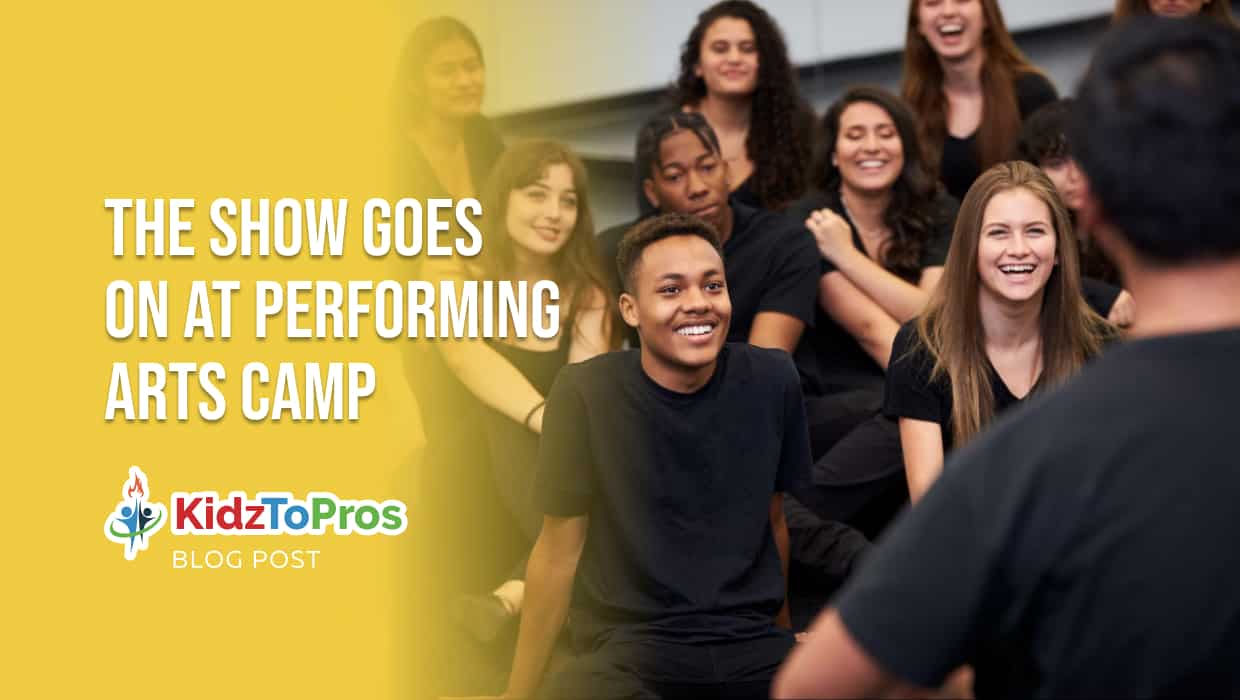 Whether your child dreams of becoming a star or just wants to shine creatively this summer, a performing arts camp will help them realize their goal. At camps like these, young performers tell their stories, improve public speaking skills, or come out of their shells to feel more confident than ever before.

At KidzToPros (KTP), we create an environment where kids ground themselves on stage and experience a unique kind of magic – a place where mental, physical, social and emotional development grow. All that growth lasts much longer than the summer, both on- and off-stage.

If you are still unsure whether a KTP performing arts summer camp is right for your child, these popular programs will soon convince you – and make you want to applaud.

We encourage campers to create an original story and put it on the big (or little) screen at this popular camp.

Our two-week experience begins with kids writing a play. This involves discussions around plot and character development, as well as originality. When they’ve created something meaningful and engaging, the kids spend the second week producing it as a movie.

This allows kids to get familiar with the craft of storytelling. They begin with an intentional idea and utilize a storyboard to plan out shots. Young filmmakers direct their own short stories, commercials or other videos. We provide all the necessary supplies and tools for filming, music and editing.

In this camp, creatives also get used to looking at professional work for tips, clues, lessons and inspiration. Each day, KTP instructors present kid-friendly film examples to review, explore and deconstruct. Instructors also lead campers through the basics of writing scripts and making films.

Through our performing arts camp, kids examine and channel their creativity using narrative expression. Some kids find tender feelings more difficult to express. Writing and filming these emotions through characters allow children the opportunity to express themselves in a healthy, positive environment. This also makes it easy for them to express themselves in school, in social situations, or in future job interviews.

KTP programs engage children’s imaginations and support them in developing their own, unique voices.

If your child doesn’t have two weeks to spare, consider this one-week option, where they’ll still learn the basics of creating and telling a good story, while having fun.

In just five days, campers develop their own project and participate in other campers’ short films during Film Studio. They also use foundational ideas and a storyboard to transform any idea into a short story, commercial or another video.

This KTP performing arts summer camp provides a safe setting for kids to explore a bit outside their comfort zone. Even after practicing with other campers, it takes courage for youngsters to put themselves out there, whether on stage or in the creation of art. Young artists learn to become vulnerable and accept feedback about their work. Once they shed the idea of what’s good or bad art – because there is no such thing –  they relax and let their work speak for itself.

The confidence that grows in summer camp translates to every corner of kids’ lives. This includes school, social situations and any new experiences.

Kids enjoy this fun improv course! Learning skills and techniques, they build a convincing stage environment for comedy skits. Campers learn to work together as a team and cooperate with one another to come up with the best product. This skill allows them to tell stories together in shared spaces.

KTP improv games keep students moving and thinking quickly. They say ‘yes’ to prompts and see where it leads them, a valuable skill in real-life scenarios. As a result, campers shine in each of their performances.

At performing arts camp, losers don’t exist. When kids get up and do their best, they’re a winner every time. These wins occur when everyone on stage works together to create the best show possible. Our instructors encourage students to think not only about their contributions to the show individually, but also how their performance can enhance the work of a collective ensemble.

Playing principal or leading roles brings a sense of responsibility to a child’s life. Older kids use their experience to help younger kids through their first performances. This group dynamic values the special talents of every performer, leading to the creation of powerful scene actors and set designers – and increased creative growth.

Benefits On- and Off-Stage

Numerous studies show that performing arts camp benefits kids both on- and off-stage. Here’s how:

Many children enjoy performing because it’s fun. The extra bonus is spending time during the summer expressing themselves, feeling confident and playing cooperatively with others.

Ready to bring out the artistic side in your child this summer? Find out more about performing arts and KTP summer camps near you today. They’ll leave you applauding – and your child smiling a mile-wide grin of happiness and confidence!

Why Performing Arts Programs Are So Popular

Performing artists use their bodies or voices to express themselves, often in beautiful fashion. Whether creating and performing music, dancing or acting out drama, these entertainers provide audiences time away from their busy lives. Children Read more…

Makerspace Camps: They’re All the Rage

Today’s students need 21st-century skills to live and work in a tech-oriented future. And what better place to acquire those skills than Makerspaces? A relatively new form of exploratory learning, Makerspaces provide a place for Read more…

How the Best Camps for Kids Build Character

As parents, we want our kids to grow up to become kind, compassionate, caring adults, right? Of course we want them to lead happy, successful lives, but we also want them to be considerate of Read more…